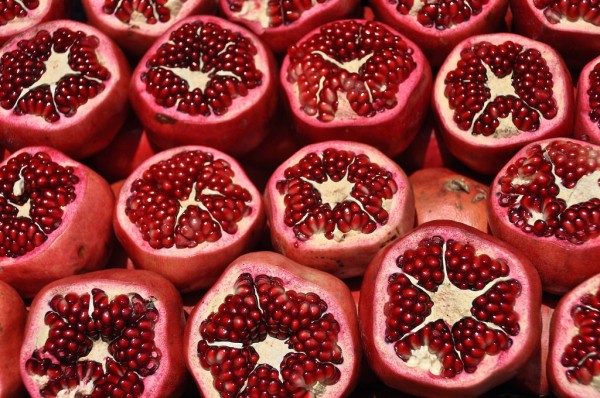 One superfruit that has been used for ever!

Considered as a superfruit, pomegranate has protecting effects against oxidant stress, cardiovascular diseases, dementia, inflammatory reactions and some cancers. A real health elixir due to its high polyphenols level – which are strong antioxidants three times more elevated than green tea ones – as well as vitamins B6, B9 and C.

– Pomegranate protects against cardiovascular diseases and delays the appearance of arteriosclerosis (the thickening, tightening and elasticity loss of arteries).

– It would protects brain from dementia and from diseases such as Parkinson and Alzheimer due to its neuroprotective effect.

–  This fruit would be a real weapon against some cancers (prostate, breast and colon) by its negative action towards cancer cells multiplication. It would also increase fat resistance from oxidation.

– Consuming raw pomegranate lowers bad cholesterol level. A study based upon 50 subjects had shown that the triglyceride / cholesterol ratio had considerably been reduced.

– Pomegranate improves blood circulation among arteries! A high pomegranate consumption is truly beneficial for sport enthusiasts! The blood vessels as well as the intestinal flora are cleansed, enabling great performance. This fruit also eliminates free radicals that appear during the effort, which guarantee a fast recovery!

– Regarding weight loss, its antioxydant properties prevent the organism from fat accumulation. Also, it is calorie friendly as it is mainly composed of water.

– Its antibacterial and antiviral properties are for real! This fruit eliminates intestinal parasites and prevents constipation, which encourages a healthy digestive system!

Thus, having one of our pomegranate shot on a regular basis will protect yourself and make you stronger! 😉